Janet Stahle is a painter and printmaker. Fine art studies were completed at the University of Guelph and at several other Ontario colleges and universities. She also has a Master’s degree in philosophy. Janet’s love of exploring media is apparent in the diversity of media she works in which include pastel and acrylic paintings, woodcuts, linocuts, etchings, monotypes and mixed media. Recently, she is experimenting with combining traditional methods of art making with digital methods which she calls “tradigital”.

Janet’s work has been exhibited at the Art Gallery of Ontario, the McMichael Gallery and in numerous solo and group shows as well as nationally and internationally. She is the recipient of many awards. Her work has been featured in Canadian books, magazines and newspapers and is included in both private and corporate collections. She is a faculty member in Fine Art at Nipissing University and Fleming College. 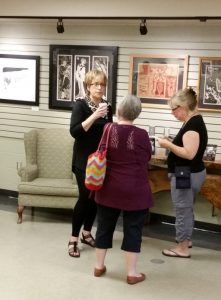